I was raised with my two siblings Louis and Nike in an architecture household close to the city Darmstadt.

Sport always played a big role in my family. My dad´s enthusiasm for all kinds of ball sport made me play Tennis from the early age. With his support I played successfully in the clubs youth team as well as in the squad until the age of 14. Nevertheless the pure of horses cast a spell over me very soon. Tennis was nice, but horses were fascinating! From 5 years of age I rode alongside on the local clubs horses, but very soon I started taking part at small shows and my mum bought our first family horse.

For me it has always been a destiny to have horses in my life. My mum has chosen our horses as well as my trainer with the goal of joining training pathways and shared education – from the beginning I learned how to ride young horses and work with them -
I am very grateful for my mum´s foresight at that time as these experiences help me a lot in my daily work with them right now.

Ever since I was a child I was certain to not only make my interest in horses my purpose in life but also my occupation. In order to build that on a economic basis I opted for a finance and business administration study, which I completed during my time at Dorothee Schneider’s stable “Gestüt St.Stephan“. After 6 years of intensive teaching and lessons from Dorothee I set up my own business in 2015.
Additionally i would like to take the exam in a master of horse business to pursue the joy of teaching not only horses, but also trainees. In autumn 2018 i could register for that.

Besides the formative time at Dorothee Schneider´s place, i was also schooled by Hans Riegler, Karin Hahn and Johnny Hilberath, as well as Armin Schäfer jr. in the jumping saddle.

The longstanding education with Dorothee can be summarized in one sentence: “Learning from the best.“ Precise riding is continuous motivation for the horses whilst she is educating them in an outstanding and exemplary manner. The basic principle to see horses as your partner in sport apply for her as well as for me. At this point I would like to take the opportunity to thank her dearly for this exceptional apprenticeship.

The daily work with horses implies steadily learning in a variety of ways - so, I am always looking forward to the future. Thereby I benefit from the help of my trainer Sebastian Heinze, with whom I work with since 2017. 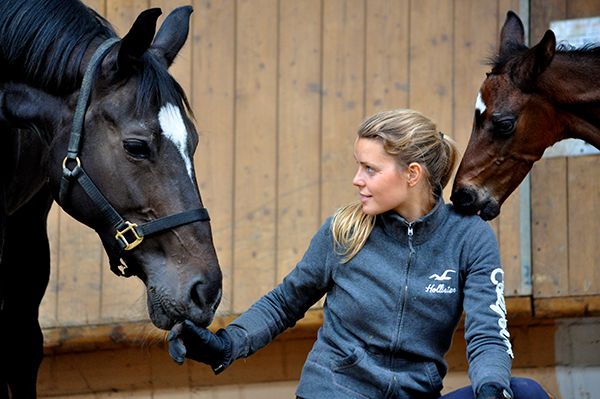 “Riding is not only a job – it is lived passion“

In my opinion, one of the most important tasks of a dressage rider is to keep and improve the horse’s motivation. Only a motivated and content horse is willing to perform and form a team with its rider. Every horse is an individual, which should be treated and be ridden individually. The horse’s strength and self-confidence should be encouraged in order to make them dance and shine. Dressage riding is not only about performing correctly – its fascination is created by the horse and rider who build a unity in the arena.

With a diversified, consistent and constant education, I want to use my time for the education of dressage horses which reach from Youngsters up to Grand Prix Horses. This education and training is supposed to give scopes for individual development, depending on the individual needs of every single horse. The well-adjusted, balanced horse, according to appropriate standards of education is, for me, of capital importance, which I certainly communicate during the classes I give. 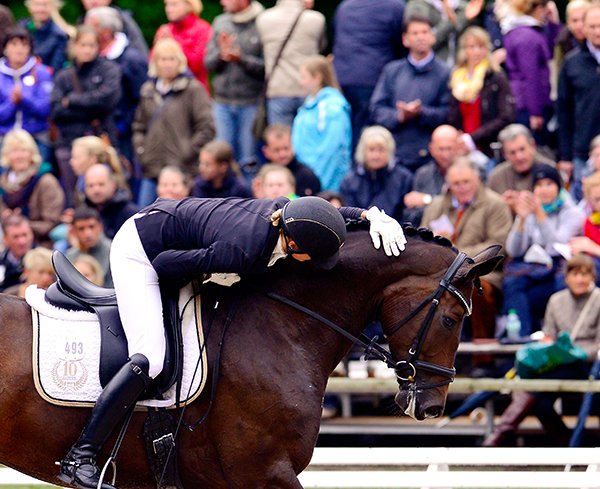 “Motivation is the engine“

successes with my most important companions 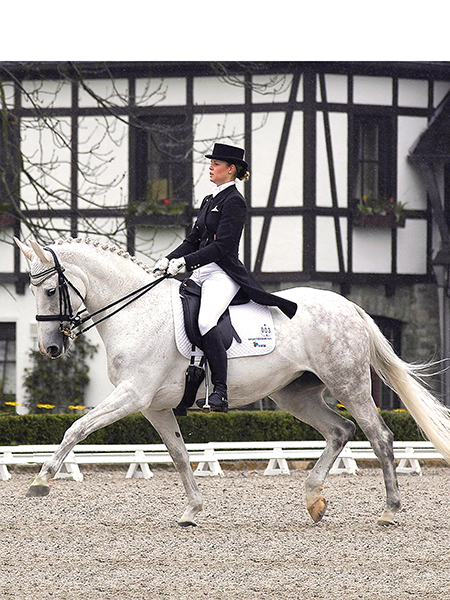 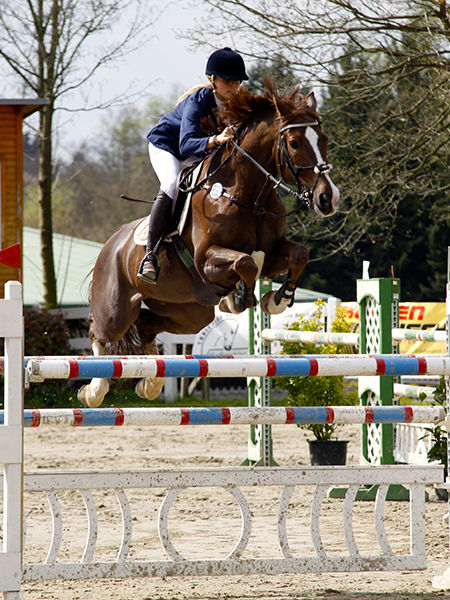 International successes up to class 1.40 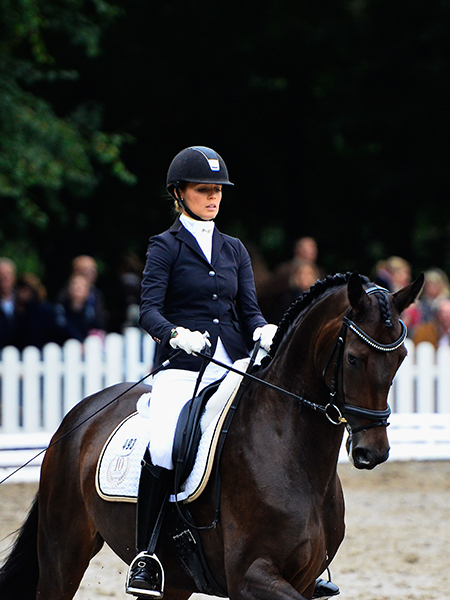 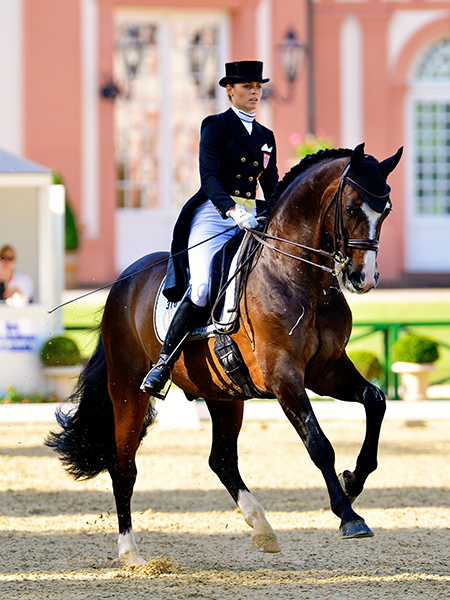 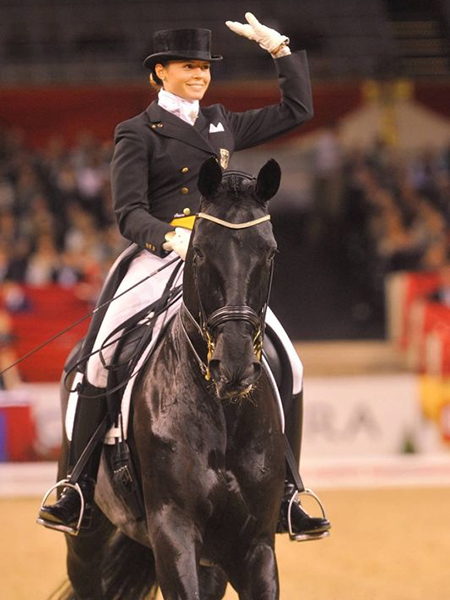 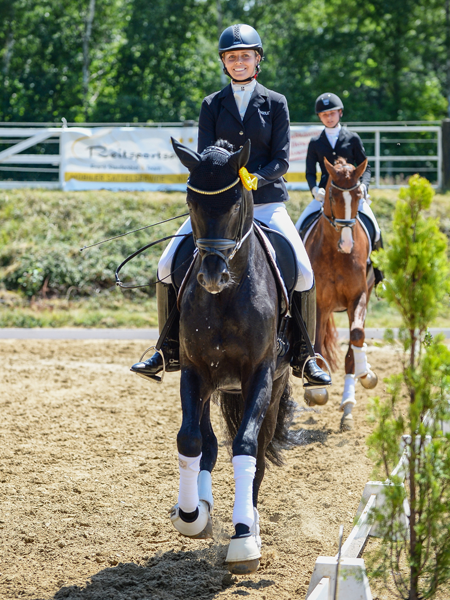 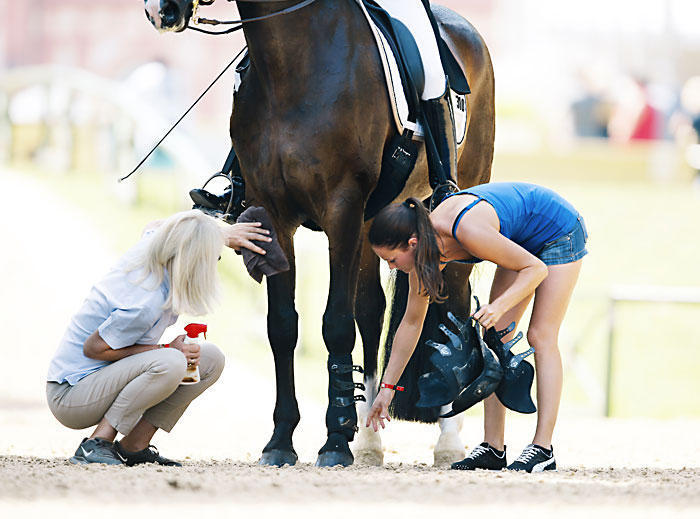 My daily focus is on each horse is correct dressage training, always taking into consideration the horse´s age, health and mentality.
According to the horse´s level of training its seven-day week will include: 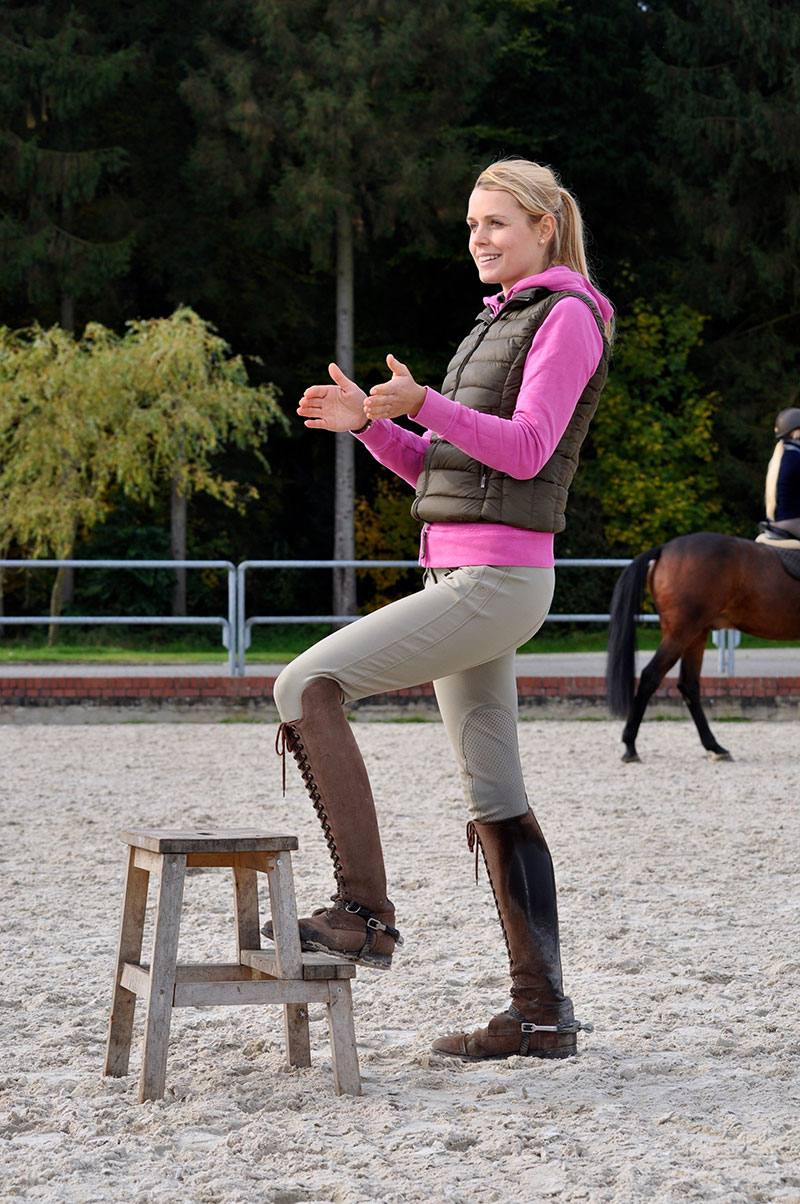 In my lessons i take pride in helping my pupils to learn the correct aids of classical dressage, always regarding a proper seat.

"Dear Stella, when I saw Hamilton for the first time I knew that he belongs to me. Every time I go to the stable I´m happy to have him and don´t want to miss a second with him. Everything you told me about him is true 100% - thank you for your honesty. Especially in horse business and trading that is hard to find. I´m looking forward to many more years with this sweetie and I´ll keep you up-to-date, thank you for your support."

"Yesssssss - our mare Love Story *2015 by Fürst Romancier-Sandro Hit-Akzentt II (Love Story Stamm) becomes a state premium mare! We are more than happy……Also we would like to thank Stella Charlott Roth and her team for that professional training with this mare, so friendly, with „horse-sense“ and a lot of „heart“ - incredible!…."

"Hey Stella, today Dunhill is already 9 month with us and we´re still as happy with him as at the first day….Everything just makes so much fun with him - for us he is just the perfect horse - thank you for that!"

"You´re the best, thank you! I would recommend you to everybody! It´s great how you treat the horses everyday and Feather is just superb. Such a good job, Stella!"

"That´s how we think a sales video should look like. Without much pressure - you can see how the horse actually is. Praise to the rider! Well done!"

"Thank you so much for the follow up and wise training. Looking so much forward to seeing and riding her again. You are the best choice for horses Stella!"

"Hello Stella, Rendevouz was really good in training the last days. You did a super job with her, I´m really thankful for that - there would not have been a better place for my horses. I would be really happy if you could continue to ride Rendevouz - it helped me a lot and that’s what I need for the future with her. I´m so excited how she feels - she became almost perfectly stable in the neck - i could have never imagined that this will happen. I liked also Flapper a lot when you were riding him, I have never seen him moving like that before - hopefully he will be like this with me someday, too."

„Dear Stella, I have looked at a picture of Rooney, that you sent me the 26th of march and compared it to one taken yesterday (3rd of may). It´s unbelievable how good he looks right now. That shows, that you have taken care of him perfectly and trained him so well. Unbelievable, I´m so thrilled !"

"I was at Stella´s place in Germany several times with my horses: she always sets highest priority to a correct and balanced seat and gave me a lot of good hints for the show. A big thank you to her professional and loving care! Moreover she always makes great effort for the well-being of her horses."

"Dear Stella! Thank you for an amazing time with you and the horses in Bippen! This year have been amazing in so many ways and something I will always carry with me. I have developed my riding, but also grown as a person. When I decided to move from Sweden to Germany I didn’t know what came ahead nor that this would be the best year I’ve ever had. I am very sad to move back home for studies but everything has its time and I’m forever grateful for the time I got to spend with you and the horses. I’m so thankful for everything you taught me, all the horses I got to ride, and the fact that I got a friend for life. It has been an honor to work with such a humble person with a huge passion for her work and great love for her horses. It has ben a huge pleasure working with you. So again, thank you Stella!"